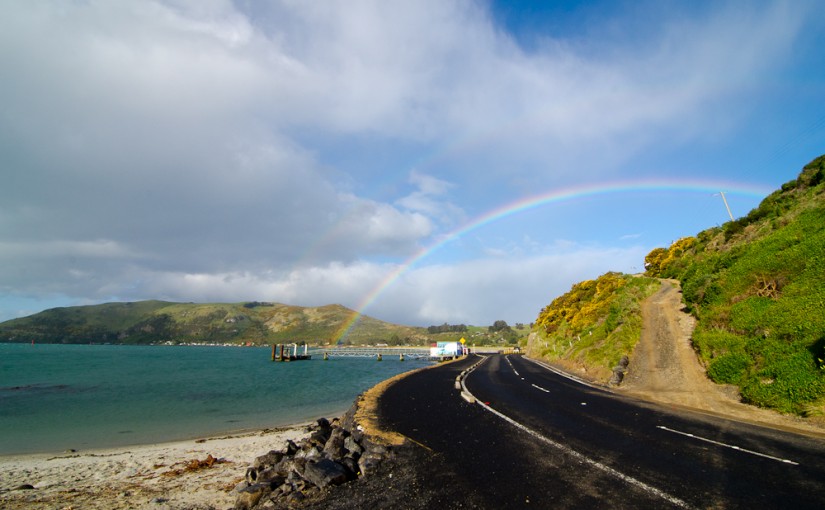 Don’t let that photo fool you – today was not the best day of the holiday.

We arrived in Dunedin late yesterday afternoon, and are staying at lovely beachside hotel in a suburb called St Clair. We grabbed dinner at a nominally Thai restaurant (Pan-Asian cuisine anyone?), where our waiter was quick to recommend some activities for our time here. His main recommendation was an ecosanctuary, so we headed there this morning. And that’s when things took a turn for the worse.

It was super windy when we arrived, and as we got out of the car my bag got blown off my shoulder. Unfortunately my camera was in said bag, and once we were inside I discovered that my lens had snapped off the camera body. While technically it’s possible to still take photos using that lens, it does require me to hold it in front of the body, so from this point on it’s nothing but wide angle or 50mm shots.

Obviously I was kicking myself for allowing that to happen, which did take the shine off today a bit. However the sanctuary was still very pleasant, and although we didn’t see of the rarer birds they have there (probably keeping out of the wind), there were still a few ones that were new to us.

We spent the afternoon exploring the Otago Penisula – well actually we started driving across it, and then realised we were about to run out of petrol. Deciding there had been enough sour notes to the day, we turned back, filled the tank and then set out again. The peninsula is home to albatross, penguins and sea lions. Our timing was not great though – it’s albatross breeding season, so they’re not really around much, and with the sunsetting after 8pm, penguins weren’t going to be around until we were well into dinner. Despite the lack of wildlife, it was very scenic, and I guess any day you see a double rainbow can’t be all bad.