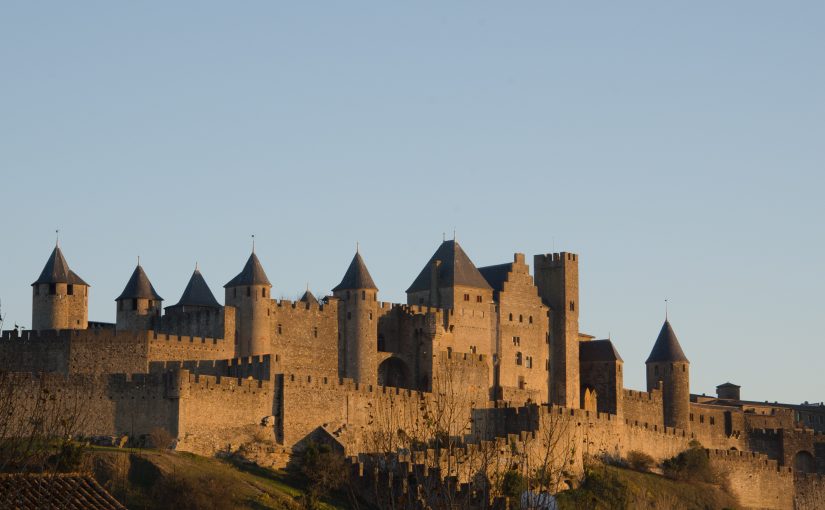 We have a car now! Which is at times terrifying. At least I’ve stopped reaching for the gear stick with my left hand, and no longer feel a jolt of terror when moving into the overtaking lane. France as a nation seems to view road rules primarily as suggestions; at least in Carcassonne most of the streets were one-way, so I didn’t need to navigate oncoming traffic as well as avoiding snapping off wing mirrors.

Obviously, when we knew we were coming to France, our thoughts turned to what French towns we had heard of, and being massive nerds, Carcassonne was on the list solely due to the board game(s). I suggested it, Sim took little persuading, and several months later we found ourselves gazing up turreted towers clustered on a hilltop and lit by the setting sun.

It really does look exactly like the game. The city walls were built in the 12th century and are astonishingly intact. Although the “new” city (still dating back to like the 14th century) is located outside the walls, the old city is entirely functional and includes restaurants and pubs, traffic lights, hotels, and bag dispensers for disposing of dog poo (not always used) as well as the ubiquitous tourist trash shops (I bought a tea towel). Our first proper meal in France was actually within the walls of the old city, where I moaned aloud at the pleasure of eating a salad (we’d been over two weeks in Spain and Portugal, the Peninsula of Meats) and we learned that the French, creators of the metric system and hence pioneers of practicality, bottle wine in volumes of 500mL as well as 750. The former is less common, but has been available in a few places we’ve been to so far, and is the perfect amount for two people of modest appetite to drink over the course of a meal. (I’m not talking about carafes which are also available; these are actual bottles of wine but slightly smaller.)

We had one full day in Carcassonne, and we intended to spend it within the old city walls. We quickly learned that buying a ticket to the keep would allow us to walk along the otherwise-forbidden ramparts, and nothing was going to hold us back. I even sang the song “Ramparts” by Kashmir as we went; it’s probably lucky it was the off season and there weren’t many other tourists, because I couldn’t really remember any of the words. The keep also included an exhibition of some of the original sculptures and decorations that have had to be removed. Unfortunately there was also an exhibition of “art” by some photographer who designed book covers for the Game of Thrones novels, which ruined the mood. The view from the walls was amazing, despite the freezing winds, and it was at this point that I learned Sim had been carrying around the game Carcassonne in his suitcase the entire trip just for this moment: as we walked along the ramparts he was taking photos of one of the game pieces with the castle towers in the background. Good to know that being in the land of sophisticates hasn’t diminished our nerdiness. (We did also play a game later; I won. Decisively.)

First impressions of France. I am very happy that vegetables are once again available to us, but otherwise I do miss how cheaply it is possible to eat well in Spain. Things are much more expensive this side of the border. The expense includes road tolls, which are insane; our first day I think we had two that were over 20 euros. It is also getting noticeably colder as we travel north, which is to be expected, though evidently this winter has hit a lot more suddenly than previous ones. Carcassonne being on a hill and close to the Pyrenees I’m sure does not help. I’m a bit surprised that Christmas here is being celebrated with as much trashy glee as anywhere else in the world, with icicle LED lights adorning centuries-old architecture. The day we arrived in Carcassonne, a group of locals were tying up spruce branches along our street, attaching them to railings and security grills. This could have been quite restrained, but they then adorned them with little cellophane-wrapped gift boxes which are the universal sign for granny decorations.