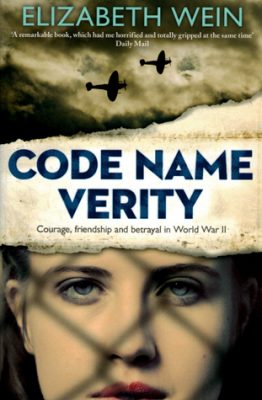 When this novel opens, Julia has been captured by the Gestapo while working as a spy in occupied France. The first half of the novel takes the form of her confession; being a novel, the “confession” encompasses a description of her recruitment and history which is actually a fairly transparent device for telling the story of her friendship with Maddie. It’s hardly a spoiler to suggest that a person who has been tortured by Nazis might not be completely honest in her subsequent confession, so there’s always a question mark hovering over the first half of the book as to how much of an unreliable narrator Julia actually is. The second half, told from Maddie’s perspective, shows Julia’s confession in a new light.

I’m a little confused about whether this is supposed to be a YA novel or not. The two leads are in their early twenties, the style is fairly simplistic, and the whole thing is driven primarily by plot; all in all, it’s prime YA territory, and certainly this book could be read by high school-aged readers quite happily. I’ve tagged it YA for that reason. (I can’t recall there being any sex in it, or even any romantic relationships, which probably means that teenagers would be bored with it.) It makes no pretense of being literary. On the other hand, it doesn’t seem to be expressly marketed at teens, so possibly it’s intended for an adult audience?

Those who have watched 30 Rock may recall that the character Jenna Maroney attended the Royal Tampa Academy of Dramatic Tricks (where she studied, inter alia, Game Show Pointing); I definitely feel that this novel got its undergrad degree from the literary equivalent of that institution. A plot in which I was less emotionally invested might have felt like a series of thinly-veiled tricks. However, the friendship between the two women, and the place to which it ultimately takes them, has genuine heart. However you feel about the technical devices used throughout the novel, emotions are guaranteed by the end. It has the additional advantage of being embedded in a fascinating chapter of World War II history about which I knew very little. (Did you know there were women aviators operating domestically in conjunction with the military in the UK in WWII? Because I did not.) Also: they’re such great tricks! I’m a total slut for this kind of structure – though I don’t want to say too much more about it, since its discovery is half the thrill.

Trigger warnings for this one are predictable given the premise, but just in case: military torture, sexual harassment, combat sequences.