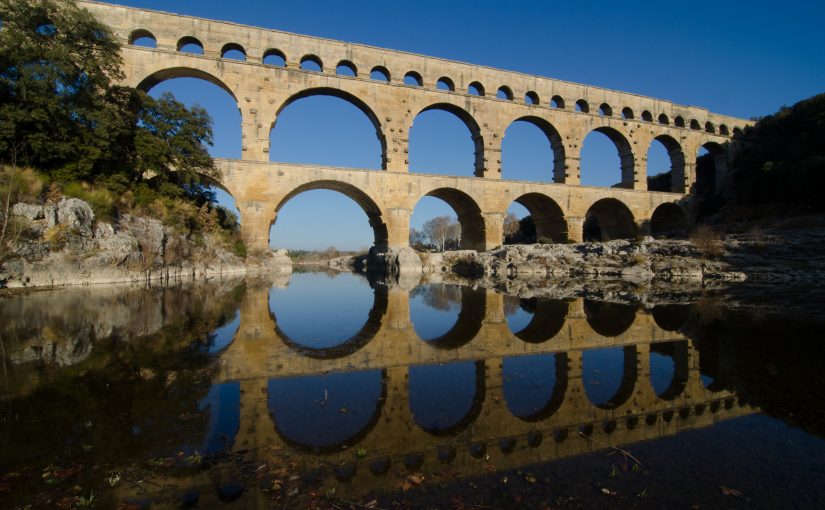 A huge aqueduct, a light festival, a birthday, secret passages…it’s been a busy few days.

After Carcassonne, we didn’t actually have anywhere in particular to stay. We had to get to Lyon, but we had one spare night to fill. Since my family were staying about halfway between Carcassonne and Lyon, and had spare beds, that ended up becoming our plan. On the way we visited Pont du Gard, which our host in Carcassonne had suggested we visit. I freaking love aqueducts for no particular reason. Maybe it’s the engineering, or the fact they look great; whatever, I’m into it. We’ve stayed near some a couple of times on this trip, but this was the first time we actually visited one – and this triple decker piece of Roman awesomeness delivered the goods.

After a lovely home cooked meal with the family (oh so many vegetables, oh so welcome!), we headed off early to get to Lyon and drop our car back. Only two minor detours required, and only one traffic cone run over, so I think we did ok. Plus we arrived at the hire car place with two minutes to spare, despite our inability to successfully fill the car with petrol. When you have to use Google Translate to work a petrol pump, I feel that things have gotten too complicated in the world. After attempts were made at two different pumps, and getting two different error messages, we gave up and just drove to the next petrol station.

Lyon has been more time seeing my family (with my sister Leah arriving yesterday, the count is now at eleven), including walking around the Fête des Lumières, a four day light festival. It’s pretty much Vivid, just spread out over a larger area, but with the crowds condensed into fewer days. Though just about every bar or restaurant you walk past has a table out the front selling mulled wine, so that is something I would like Sydney to take note of. Once the rain started it all got pretty chaotic as everyone rushed home, but perhaps no less chaotic than trying to get a group of eleven people into one restaurant for lunch, which was today’s challenge. As the official 21st birthday lunch for my sister Mary (which is what prompted this whole trip), we wanted to make sure we ate somewhere decent enough, so a few ideas were swapped around through the morning, but since it was a little late to make a reservation online, we decided to just turn up somewhere as soon as they opened. Thankfully that paid off, with us being ushered down into the cellar of a delightful bouchon restaurant. The waiters were in fine form, excellent food and wine was consumed, birthday celebration success!

On our walk back to our apartment we noticed a tour group coming out of a nondescript door. I’d been reading about these hidden passage ways between streets, and sure enough this was one of them. Originally designed to help silk workers navigate the city without getting their wares damaged in the rain, they also helped the resistance avoid the Germans during the war. How could we not check it out? Sadly they sound cooler than they are, but maybe the ones that are no longer open to the public are where the magic is.

And so, the final few days of our holiday are looming…but Paris adventures are still to come.