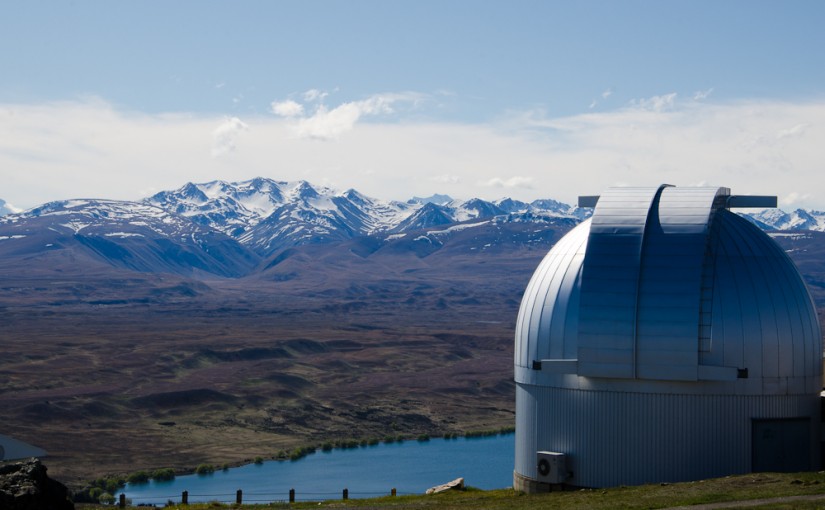 Leaving Christchurch behind, yesterday we set out for Lake Tekapo. We’d been driving along for a while when suddenly, out of nowhere, we turned a corner and someone dropped a whole pile of huge snow-covered mountains in front of the car. It was pretty unexpected to see them with so much snow this late in the year – we knew there would be mountains, but I guess we hadn’t really thought about how big they actually were.

Lake Tekapo is another one of those insanely beautiful places that make you want to yell “shut up, we get it, New Zealand!” – a turquoise alpine lake ringed on the opposite side by said snow-capped mountains. It’s located in a “dark sky reserve”: there are all kinds of rules about using white lights, which are apparently not allowed to point upwards, for instance. We took a drive up a nearby hill, Mount John, where the observatory is located (more to come) and there was a guide at the top pointing out features including Mount Cook (Aoraki). So yeah. Seen that.

I don’t want to seem like the colossal ingrate I totally am, but we’ve been having a lot of pretty fancy meals purely by accident, so when we saw that the local Japanese restaurant had great views we thought that might be a way of having a light and inexpensive meal for once. The menu was just your usual informal kind of fare, a bit of tempura, a bit of agedashi tofu, no big deal. We knew the salmon would be likely to be local so we ordered some sashimi, but we were TOTALLY unprepared for how excellent it would be. I mean, seriously. Since we went to Japan in 2009 sushi has been pretty much ruined for me because nothing lives up to my expectations anymore, but the salmon at this place was probably the best I’ve had since. I ordered a second serving not out of necessity or hunger, but just because it was so good. (In fairness, the tuna was only average at best. But what can you expect, it’s pretty far inland by NZ standards.) As if that wasn’t enough, we also ordered a venison tataki and it was outstanding.

After our unexpectedly excellent (but still both light and cheap) meal, we still had a number of hours to kill in the hotel bar before the evening’s activities, which didn’t kick off until 10.40pm, at which time we were picked up by a bus, kitted out with Antarctic jackets, and bundled back up Mount John for some star-gazing at the observatory. We were nervous all day about the prospect of clouds; in the end there was some light cloud cover but we were still able to see plenty, including globular clusters, nebulae, and other celestial bodies whose names I can’t quite recall. (Did you know there was a constellation called the toucan? Learning of the day.) We even got to use one of the big telescopes under the rotating dome thingies, though not the biggest one: Mount John is a working research observatory run by one of the universities, so people actually do serious stuff there as well as pandering to tourists. One of our guides told us the researchers there are currently engaged in hunting for earth-like planets in other star systems, which is pretty amazing.

After some eggs benedict featuring more local salmon, we left Tekapo this morning and have headed back to the coast, as we continue our journey south. Looking forward to finding out what local seafood is unmissable here as well!