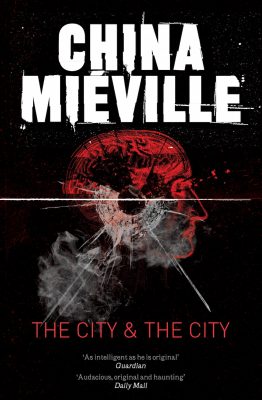 I listened to an interview with China Miéville in which he said that his intention was to create a familiar environment in a known genre (detective fiction), then tilt it so the reader lost his or her footing. I’m sure many readers besides myself then assumed, as the author intended, that a sci-fi plot was unfolding, and went with that as another known genre, before realising that that wasn’t quite right either. Miéville does use some of the stylistic cues of sci-fi, most notably inventing new English-language words that combine existing roots to describe new concepts that can, to an extent, be grasped intuitively, at least once you’ve read a sufficient volume of the text to be comfortable contextualising them. The things I thought were happening might not be obvious to anyone who was unfamiliar with common sci-fi tropes, but my mind grasped the familiar until it was clear that I was hammering a square peg at a round hole.

It’s difficult to talk about this novel without spoilers. Even the genre tags are spoilers of a kind, for the reasons discussed above. I explained the underlying concept to Sim, and while his mind wasn’t blown, exactly, he did kind of make the Keanu face from The Matrix. I enjoyed the use of genre tropes as a way of destablizing the reader. Also intriguing was the concept of “unseeing”, a discipline practised by the inhabitants of the novel which is beyond a failure to notice: it resembles a positive determination to only see what is meant to be seen. Of course, to an extent, we all do this every day: the entire detective fiction genre depends on it, and it’s the way we each create our own experience in a world with too much detail to consciously absorb.

One question I haven’t quite reached a conclusion on is whether this novel works ultimately as a piece of literature, or whether it’s merely an intriguing puzzle. In a way, the plot seemed arbitrary: the created world was the real point of the story, and the plot was just the most obvious way of exploring that world. However, I don’t think it’s quite fair to describe the novel as a brain without a heart: the detective/narrator, Borlú, is more than just a flat genre archetype, and as our window into the world of the novel I think first-person narration through his character is one means of ensuring reader engagement beyond the cerebral level. Fans of Jeff VanderMeer might enjoy this: the “weird fiction” label certainly applies.