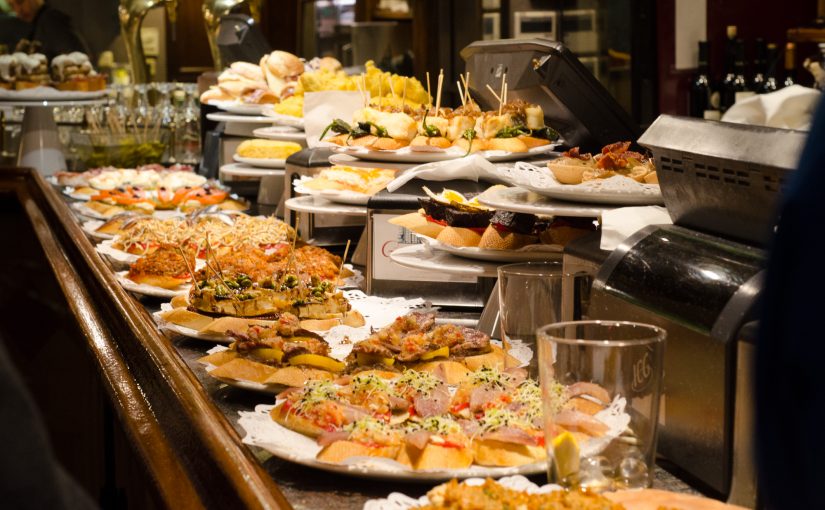 It’s our last night in town, and in the couple of days we’ve had here in San Sebastian, we’ve done very little other than eat amazing food. I am on board with this.

I mean we have done the occasional walk along the coastline, and did see an excellent exhibition of photos by Berenice Abbott that made me feel totally inadequate in my photographic pursuits [She worked in Paris in the 1920s, and the exhibition included portraits of Sylvia Beach, James Joyce, and Djuna Barnes! – HS], but otherwise we have been eating.  If you’re not aware, San Sebastian is gourmet central – heaps of Michelin starred restaurants, and more pintxos bars than you could possible handle. We briefly thought about going to one of the starred restaurants, but we decided we were having too much fun with the bite size enjoyment of pintxos.

We were given many recommendations of pintxos bars to go to – Kari gave us a list. Our Airbnb host gave us a list. My sister (who was in San Sebastian just a few days before us) gave me the list she got from her Airbnb host. We just had to choose where to start. The way that pintxos is normally done is that you hop from bar to bar, having a drink, trying the speciality of the house, and then proceeding to the next venue. But with the weather as cold and wet as it’s been here, we were a bit less inclined to move around, especially when we were able to find room at a place we liked (the crowds seriously ebb and flow at these bars – it can go from empty to packed within a few minutes). Here’s where we ended up, and what we thought.

This place has a huge variety on display along their bar. The system here (as it a few other places) is that you get a plate from the bar staff, grab what you want, then give it back to the staff to finish off – this might be heating, grilling or just garnishing. We were lucky enough to get a table, so took our time. Unfortunately forgot that the house speciality was the smoked cod, so didn’t get to try that one (tip: always know the house special). [On the spectrum from traditional to modern, this place is somewhere in the middle – it’s not as inventive as A Fuego Negro, but it does include a number of less predictable offerings. – HS]

Grabbed lunch here. It was pretty packed, and pretty chaotic, so were feeling a little intimated. But a friendly staff member handed me the English menu and explained the system – here you just order what you want, and they make it for you (despite some pintxos sitting on the bar). He told me they specialised in anchovies, which checked out with the plethora of lists, and he said the first four on the menu were the best. That made it easy – we ordered three of the four, including anchovies with spider crab, and another with foie. Delicous, and perfect with some txakoli – the local white wine.

A larger bar than most of the others, with plenty of tables. Not that we had a hope of getting any of them. We snagged some space at the bar and ate a few things, had a drink, but decided to move on pretty quickly to…

A pleasant respite after the chaos of Atari. A handful of items on the bar, and then a board to order hot pintxos. Highlight was the tuna stuffed pepper, or pimiento relleno con bonito if you’re looking for it (though again, they did have an English menu).

This place was the best! We realised that if we started eating a bit earlier than the locals we’d have a better chance of getting tables, and this worked out perfectly here. By the time we were leaving it was getting pretty full, but we enjoyed a table and a long (by pintxos standard) leisurely meal.

This is not your abuela’s pintxos bar. Music was pumping, art exhibition on the walls, and the food was totally in the molecular gastronomy genre, which I had forgotten was even a thing, but was quickly reminded of when the ‘soup bath’ we ordered came in a literal mini bath. English menu provided, just order at the counter as you go. Also keep an eye on the special board. There was something called a Rabrownie which we were super curious about, and when our waitress explained it was brownie, but made from ox tail (rabo), we didn’t hesitate. No regrets. [This place reminded me of the joy that came with the first wave of molecular gastronomy, before it disappeared into its own self-importance. The bartender snagged us with a called-out greeting as we wandered in, the vibe was casual and convivial, and it felt like the food was presented in quirky ways not because the restaurant was making a Significant Contribution to the History of Food, but just because the chef wanted to bring us happiness through whimsy. It worked. -HS]

Early dinner worked here too (when I say early, I mean 7pm – 8pm seems to be prime pintxos time) – this place was really busy the other times we’d gone past. A wide variety on the bar, but also plenty of options to order from the board, including the excellent solomillo, a barely cooked piece of steak, served on bread (because everything is), with a good sprinkling of salt. So simple, so good. So dessert pintxos are a thing too. This place is famed for its cheesecake, and after walking past it about three times before tonight, it was finally empty enough for us to get in there (I think being Sunday night helped – this city really shuts down on a Sunday). They had other stuff on the counter too, but we just came for the sugar hit. €5 for a huge slice, more than enough for the two of us.

Basically it’s pretty hard to go wrong in this city. Everywhere we went the staff were friendly and helped us understand what we needed to do. And even when we ate (and drank) way more than we needed, it still only cost us about €30. Our tastebuds will miss this place, but I’m sure there are still good things to come – onwards to France!