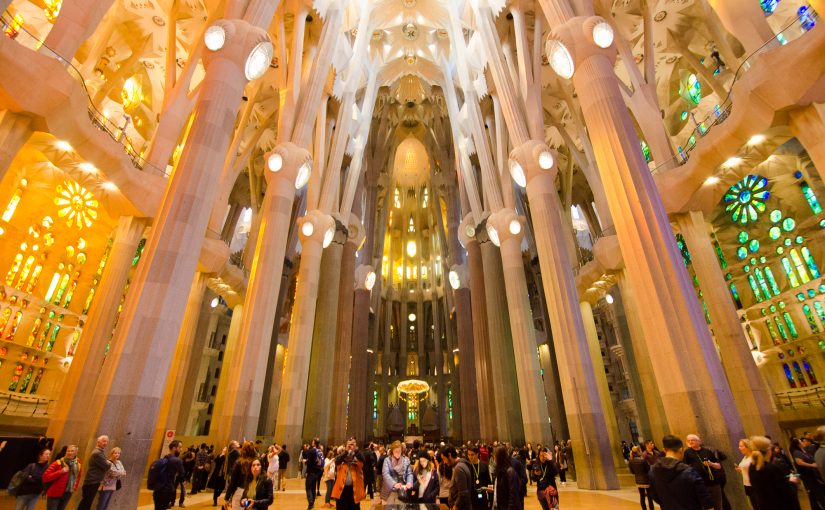 It’s Gaudí day!* The day we set aside for leaving the twilight embrace of the Gothic quarter in order to go to both Park Güell and the Sagrada Família cathedral.

This was our first proper excursion out of the old city, and I did NOT appreciate either the hills or the absence of adorable bars. I mean, I can see how if you have children who don’t appreciate good underpriced wine it might be appealing to spend a day in the wholesome sunlight engaging in some Catalan modernism. That said, if you bring children, I suggest you make sure they are self-propelling ones, as it is not a pram-friendly environment. Our first stop, Park Güell, is situated on a hill so steep and tall that there are escalators in the middle of the street leading up to the Park. Why? Surely there were more convenient locations for a park? It also strikes me as vaguely sexist given the sheer mass of clothes that women had to drag around back at the turn of the 20th century when work commenced.

Anyway we paid to go into the “Monumental Zone”, which is basically the part of the park that actually has stuff in it, the rest being essentially just a park with the occasional fake viaduct. So look. I am aware that I am a total art cretin. But it strikes me that if a woman or a person of colour produced some of these blobby spires with mosaics stuck on, they’d be considered unspeakably kitsch. But since a white dude did it, it’s somehow Art. Both of us found the whole thing pretty underwhelming, and certainly not worth climbing a stupid hill in the stupid sunlight.

Mercifully, the walk to the Sagrada Família was downhill from the park. We had seen it from a distance from the top of the park, but nothing prepares you for seeing the facade up close. It is…revolting. It looks like your hippy aunt stuck a bunch of candles in some giant wine bottles and melted a cathedral. As a piece of public art, it’s honestly baffling that anyone would volunteer to fund it, especially with construction having been underway for over 130 years so far.

We chose to pay to take the elevator up the Nativity Spire, one of two spires that are open to the public. The best thing about going up the spire is the view of the city, which you can get for free from the top of the Park. The worst thing about it is that you can once more see the outside of the cathedral which, again, looks like Dale Kerrigan found his mum a new cathedral in the Trading Post and she started prettying it up a bit. Save your euros and don’t bother.

For all my whining, the inside of the cathedral is magnificent, with huge branching columns in various pale stones and a beautiful quality of light from the stained glass windows. I could appreciate this objectively, but still did not enjoy being inside it. Why? The other churches we’d been to in Barcelona were functioning churches, and though there were tourists inside, they were silent and (mostly) respectful. Although the Sagrada Família was consecrated in 2010, it’s impossible to imagine it ever actually serving the purpose for which it was designed. It was full of chattering tour groups. In every direction I looked at ground level, I was met by a sea of camera lenses. There was no water in the fonts. The altar had not a priest standing beside it, but a security guard. I found it pretty depressing.

The worst part about the whole day was that I came back dehydrated from all the hill-walking, tried to replenish my fluids way too fast, and spent the tail end of the day puking into a hotel waste-paper basket after failing to make it to the bathroom. Coincidently or not, we now both have some kind of illness characterised by fever and gastro-intestinal distress, which is very inconvenient considering all the food and wine I’m currently surrounded by and NOT. EATING. I’ve had water with my meals for the last two days, and those meals have been bird-sized. I am incredibly frustrated.

*I wanted to do a whole Groundhog Day joke here but Sim said it was too much of a reach. Also, Gaudí day was now two days ago, we have not updated this due to being inconveniently sick. More later.