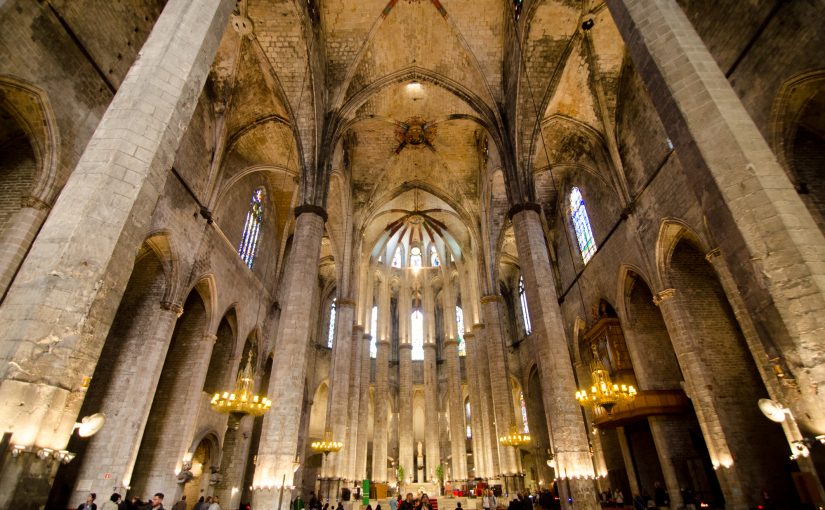 While yesterday was all about food, today turned into a healthy dose of art, religion and history.

The Museu Picasso was one of the few things that was on our to do list for Barcelona, and we headed there first thing (at 9am pretty much the only people you see around are tourists – this city likes a lie in). The works in this museum are not really Picasso as you know him; this is mostly his early work. And when I say early, I mean 13 year old Pablo, turning out portraits of his family that are just ridiculously good. If that wasn’t enough to make you realise Picasso was a bit of an over achiever, the collection also shows off some of his sculptures, pencil sketches, charcoal drawings and printmaking. Seems like there wasn’t much he couldn’t do.

Next stop was the Basílica Santa Maria del Mar – really just because it was pretty much next door to the museum, so thought we should take a look. We happened to arrive just as a Mass was starting, and since the priest threw in a welcome in English I decided to hang around. Turns out it was the “International” Mass, which really just meant the very occasional bit of English, French, Italian and German (and probably some others I didn’t pick up), and everything else was in Catalan. Still, there are probably worse places to sit through an hour of something you can only vaguely follow than a beautiful Gothic church.

After a solid lunch featuring some of the razor clams and monkfish we’d seen at the markets yesterday, last stop for the day was Museu d’Història de Barcelona (Museum of the History of Barcelona). Turns out that a lot of the galleries and museums have free entry after 3pm on a Sunday afternoon, which was a good enough reason for us to check it out. I really had no idea what was going to be inside, so was really not prepared when the signage directed us into a lift, which took us down to an archaeological excavation of a former Roman city dating back to 5BCE! We spent ages wandering through the ruins, with highlights including vats for making fish sauce, an elaborate series of pipes and tanks for fermenting wine and a paving stone engraved with a game from sometime between the 1st and 5th century. Board games and wine; these sound like my kind of people!