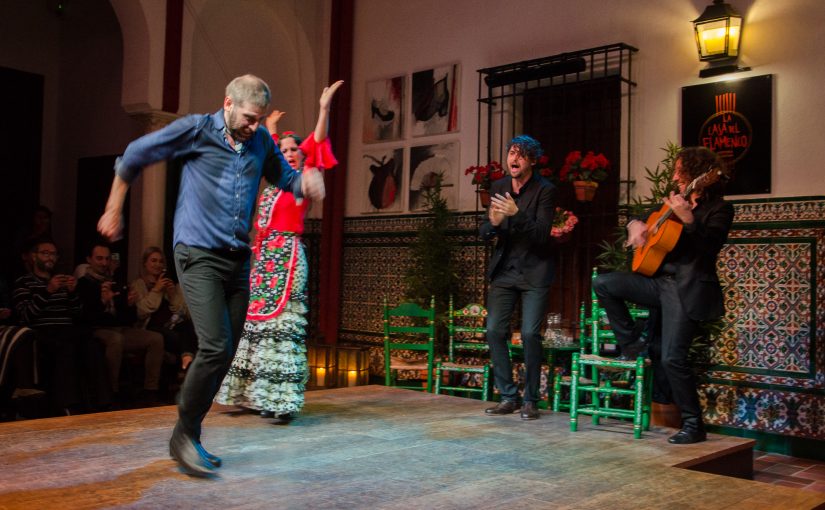 After an epic train journey from Barcelona, we’ve been spending the last few days in Seville. We both quickly agreed that this place feels like Spain – the streets are lined with orange trees, the buildings are plastered white with little orange balconies, and you never have to wait long until a segway tour rolls past you. Ok, so maybe we’re a little too close to the tourist centre of town to get true authenticity.

With Holly deciding that a day of convalescing was best, it worked out quite well for me that my brother Hilary happens to be in Seville too – he gets someone to share tapas with, I get someone to go exploring with. Win win.

Hilary and I spent yesterday doing a walking tour through the northern suburbs of the city, visiting a handful of the approximately one billion churches in Seville. Our guide was a history graduate, and got pretty into filling us in on the different periods the churches were built in, and the different architecture styles applied, which I was totally into. Most of the churches around are converted mosques, and they retain some elements of the Arabic influence in one way or another, even if they have had giant Gothic arches stuck into them. The tour ended in the suburb of La Macarena, where one of the few remaining pieces of the original city wall still stands – I’d seen it on the map and assumed it was Roman, but turns out that what’s still standing was built during the Islamic rule around the 10th century to keep out the Christians. Guess that didn’t work out so well.

After a late lunch (too late by Spanish standards, as some places were closing – I just can not get these meal times right), we checked out the areas around the river. It was surprisingly non-touristy given the wealth of selfie opportunities presented by the views.

Holly had decided she was feeling well enough to leave the house by this point, so the three of us ventured into the criss-cross of lane ways to head to a flamenco show. Apparently Seville is the birthplace of flamenco, and there certainly are a lot of places that will gladly take your money in exchange for an ‘authentic’ performance. Having literally no idea what makes a good flamenco performance I don’t know how what we saw would rate on the flamenco scale (presumably that runs from one to ole), but it was certainly an enjoyable experience. The guitarist broke a nail, and the dancer’s shirt tore across her shoulder, so I think it’s safe to say they were both putting in 100%.