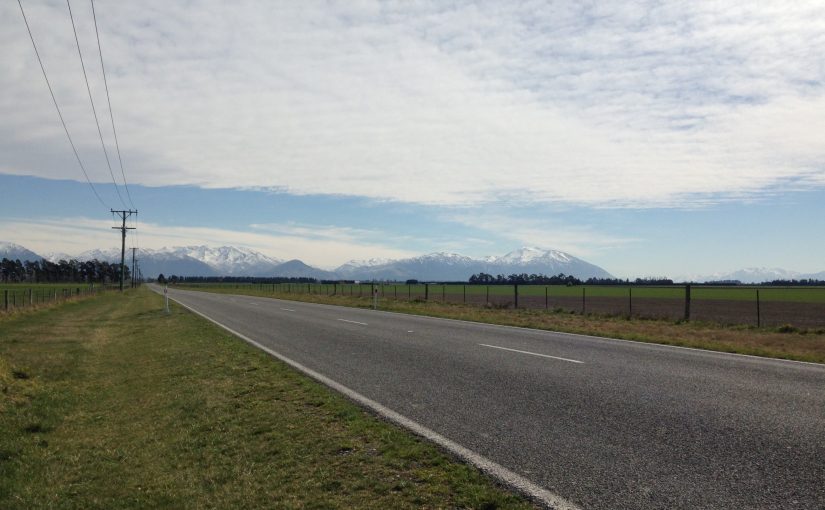 As you will be aware from Sim’s previous post, I bailed VERY early from the skiing experience. As such, it fell to me to fill in a day by myself while Sim went up the hill (an expression I overheard some locals using at the pub). The town of Methven is pretty grim if you’re not into winter sports and/or putting non-traditionally-made pizza into your body. It’s basically just here to cater to snow tourism; what happens for the other nine months of the year I have no idea. Accordingly, I laced (zipped) up my boots and set out to achieve the following.

1. Check whether the injured sheep we had noticed the night before was still hanging out by the side of the road. (I named her Irma.)

2. Find an acceptable croissant in a town with one principal street.

3. Drive around listening to Prince.

4. Go to the nearby town of Ashburton and see what’s there.

5. Nick some extra laundry liquid from the housekeeping cart.

1. Irma had vanished; no obvious signs of being dragged off by dogs.

2. Fared as well as I deserved to on such a fool’s errand.

3. Awesome as always, until I did something to the stereo that caused it to only audibly play synth and backing vocals.

4. Technically successful, in that I got to Ashburton and saw what was there. This included a transparent clock tower, what seemed like an unnecessary number of churches, a Fijian buffet restaurant (intriguing, but did not try, suspect heavy on the sweet potato), one fancy kitchenware shop, and a number of railway crossings. I did observe a parking inspector interrupt a woman about to put coins into a meter to inform her that, actually, she could enjoy an hour of free parking before it was necessary to pay anything. So. That’s something new.

Against the possibility that there was something important in the town I was missing out on, I went to the tourist information site and picked up a leaflet entitled something like “wacky ways to spend time in Ashburton”. One suggestion was to “roll down one of the only hills” in the town.