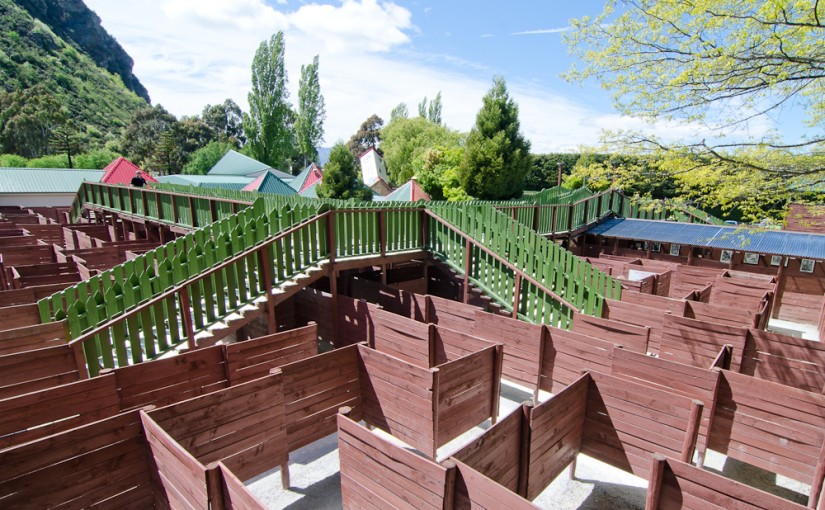 We all know Queenstown is the adventure capital of New Zealand. Bungy jumping, jet boating, canyon swinging, gondoluging (ok, that one was just Holly misreading the gondola and luge sign, but it’ll probably happen soon enough) – it’s all there. So of course we decided to drive an hour out-of-town and walk through a maze instead.

Queenstown streets are basically bar, bar, souvenir shop, extreme sports booking centre posing as an information centre, restuarant…repeat. Sure it sits on a lake, and it’s surrounded by beautiful mountains, but I’m pretty glad we didn’t have a lot of time to spend there. Though perhaps if I’d realised there was a Frisbee Golf course there earlier my opinion may have changed.

When I was first looking for things to do on our trip, I came across “The Amazing Maze ‘n Maize” which is made out of a cornfield; despite having the best name ever, it was in Auckland and thus not on our way. But my sisters had visited a place called “Puzzling World”, and that was close enough to Queenstown for us to make the detour. First stop – the Illusion Rooms! A few holograms, a very queasiness inducing tilted room and some other odds and ends provided some brief amusement, but let’s be honest, it’s all about the maze.

Southern Highland readers of a certain age may remember the Castle Maze that used to exist in Mittagong – this maze turned out to be exactly the same sort of thing, with four corner points to find, and an exit in the middle. There was a brief discussion about whether we should split up and race each other to the finish, but given it was the last day of the holiday we decided it was probably best not to get competitive for once. So instead we employed the wall follower rule – pick a hand, and place it against a wall of the maze, and keep walking. Wikipedia tells me that this technique only works for simply connected mazes, which luckily for us this one turned out to be. While other people ran past us in increasing states of frustration, we coolly and calmly found the four corner points and ended up at the exit. Logic for the win!

Our self-awarded prize for completing the maze was meant to be an amazing lunch at a local winery, however when we arrived it turned out it was closed for a private function. We drove around trying to find an alternative, and settled on another winery, which was fine, but nothing special.

The evening was spent wandering the streets of Queenstown trying to find something we wanted to have for dinner. We’d had a lovely meal and drinks on our first night there (Eichardt’s Bar if you’re ever in the neighbourhood), and it was proving difficult to find something appropriate for our last supper. Whilst walking the streets we bumped into our new friends Di and John from the Doubtful Sound boat – they had wisely chosen a low-key pie option for dinner, but the venison pies we’d had for lunch the day before were going to be hard to beat, so we pressed on. In the end a London themed bar proved our final destination, though they managed to lose our food order meaning we sat around for an hour watching other people’s food arrive. By the time we were leaving, the band for the night had just started, and we walked out to their opening number – a folky cover of Green Day’s Good Riddance (Time Of Your Life), complete with flute solo. Time of our lives indeed.