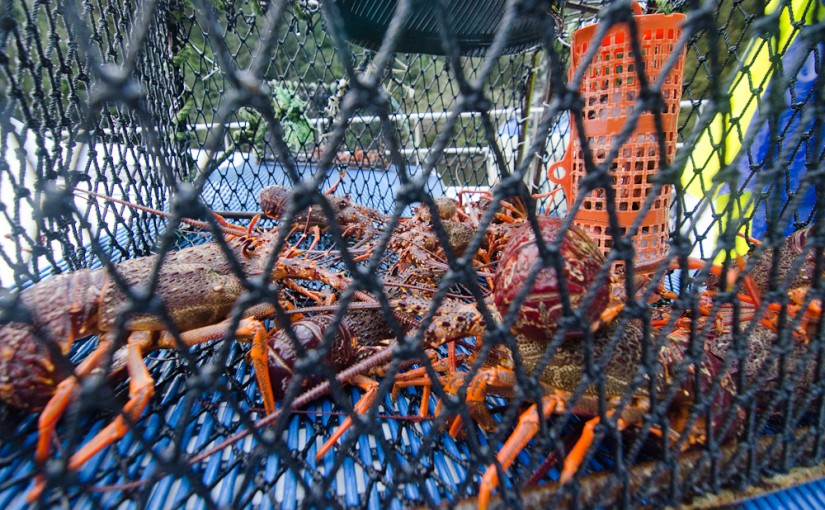 The day starts pretty early when you sleep on a boat. First, at about 6am, the generator starts (incidentally, that also means the toilet will once again be flushable – an important point, and, I suspect, the rock upon which many a relationship has dashed itself to pieces). Then the anchor is hauled up, which when you’re anchored in a fjord with sides that go straight down 40 metres, involves the winding of quite a lot of noisy anchor chain. Finally, the engine coughs into life, and you’re off. I consider myself to be pretty adept at sleeping, but if you can sleep through all that, you’re a more accomplished sleeper than I.

Consequently, we were showered and on deck well before 7, to find that the sky had rained itself out overnight and the outside world, while cloudy, was by and large habitable, with even patches of clear sky appearing here and there. Our first stop was back to the crayfish pots we’d placed yesterday. The first one came up with three or four mid-sized crays in it, and I did a little dance of excitement: crayfishing’s a new experience for me. Then the second pot came up, and it was CRAWLING with them. I found out later that one of them had been thrown back because the skipper thought it was TOO LARGE (ie a breeding male – letting them go, while not required by law, is good for the cray population). Still, plenty for the next group’s lunch.

After the excitement of the crays I thought we were done for the day, but soon we pulled in alongside a densely-forested island and the other crewperson, a lovely Dutch woman (and good cook) named Tresna, pulled out the binoculars in some excitement. The island is home to about 14 pairs of Fiordland Crested penguins, and we could see them having a morning dip! Sadly they were too far away for photos, but they were visible with and without binoculars, so that was an exciting addition to the morning.

Speaking of forestation, the explanation for this post’s title is that New Zealand’s fiordland is reputedly covered in vegetation that is the closest modern example of that that which covered the former supercontinent of Gondwanaland. It’s essentially temperate rainforest, chilly but also mossy and ferny and frankly, if you’re a dinosaur nerd, much more exciting than a bunch of trees has any right to be. The Penguin Island felt like the kind of place where Littlefoot and Cera could have settled down and raised an attractive inter-species family without worrying about judgment from the other dinosaurs. At the very least, there are probably Moas roaming its interior (in false moustaches – I’m sure it’s to their advantage that we keep thinking they’re extinct).

Anyway, back to the boat. More excitement was to come, if you want to use that word. While we were sitting around the breakfast table, skipper John pulled up a chair and looked at us all with a serious face. I don’t know whether you all noticed Sim’s use of FORESHADOWING yesterday when he mentioned a rushing mountain stream and perilous bridge – well it turned out that the previous day’s worth of rain had flooded the road, which was now impassable. The buses couldn’t get across; we were cut off from the mainland. The solution? We would instead be transported by helicopter.

This news was greeted with jubilation by everyone on board except one. The one was me. Until yesterday, I had got through my whole life without once stepping aboard a helicopter, and I was pretty happy with that statistic. When the time came, Sim clicked away happily with his camera and peered out at the glorious mountain scenery spinning around under us. I spent the mercifully short trip gripping my seat and praying that the angel of death would pass us by; if I’d thought about it a little more I wouldn’t have been above smearing a little blood on the doorposts just to make sure. (Passover joke, yo!) Obviously we made it, and I’m aware that statistically I’m probably more likely to have died on the bus to or from the helicopter than on the helicopter itself, but just shut up, ok? Man wasn’t meant to hover. God reserved hovering for bees and hummingbirds.

In fact, we made it all the way to Queenstown, our final stop on this journey. I’ll leave it to Sim to cover our last day.