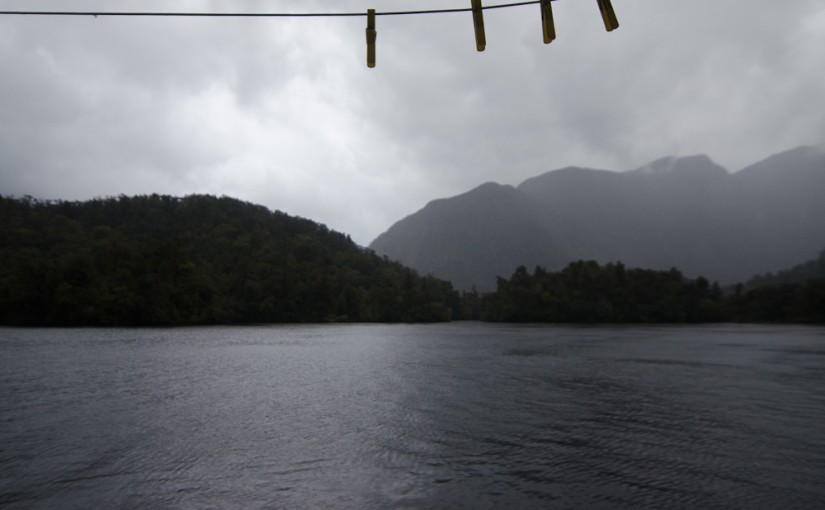 We’ve had a few days in the wilderness (sans wifi) so here’s a quick catchup of our recent activities.

After departing Dunedin, with a stop at the Cadbury Café for a super sweet hot chocolate and the purchase of some local specialities (Perky Nana anyone?), it was off to Te Anau. Te Anau is the launching point for the sounds (which are actually fjords, but in New Zealand they spell it fiords) – the well known Milford Sound, and the more obscure, harder-to-get-to and and less touristy Doubtful Sound. Of course given the choice we had opted to avoid the masses, and I had found a small boat that ran overnight tours of Doubtful.

Our decision to avoid the tourists actually worked out perfectly – upon checking in, our friendly motel owner (of which in this county there is no other kind) told me the road to Milford was likely to be closed the next day due to rain and possible avalanches. Vindication! However it was still seriously raining on our way to Doubtful. The road may not have been closed, but our bus driver was pretty anxious to get us over a particular bridge that lay between us and our boat before it flooded. After navigating that (the river indeed looking very close to the road), we arrived at the Southern Secret, our home for the next day.

Having done similar boat trips in Vietnam and Norway, we were always going to be using those as a benchmark. Upon boarding, we were immediately presented with a lunch of fresh crayfish and salads – it may not have been the Captain’s wife’s fish, but it was still pretty fantastic. Things were looking positive.

Unfortunately the rain just did not let up. Kayaking was offered as an activity, but no one felt particularly interested in getting soaked to the bone. If the rain wasn’t enough, the wind was also rather ferocious, resulting in some rather choppy water. As Holly rediscovered in Akaroa, she does not deal well with such conditions. Let’s just say that the crayfish lunch was wasted on her…

Speaking of the crayfish, the traps for them are set each evening, with the bait coming from whatever the guests are able to catch that afternoon. From memory I think the only time I ever tried fishing I was about six years old, so I was somewhat keen to give it a go. And after one of the other guests on the boat had caught something within about 10 seconds of dropping her line in, it seemed like conditions were favourable. So a few of us stood in the rain, catching tiny little sea perch after tiny little sea perch. Soaked, but satisfied, we retired inside and dried off a little before feasting on a roast lamb dinner.

We dropped anchor in a sheltered area, and settled down for the night. Despite the rain, the views had still been rather special, the food was great, the boat was comfy, and the guests and crew were good company. There are certainly worst ways to travel, and worst places to do it in.