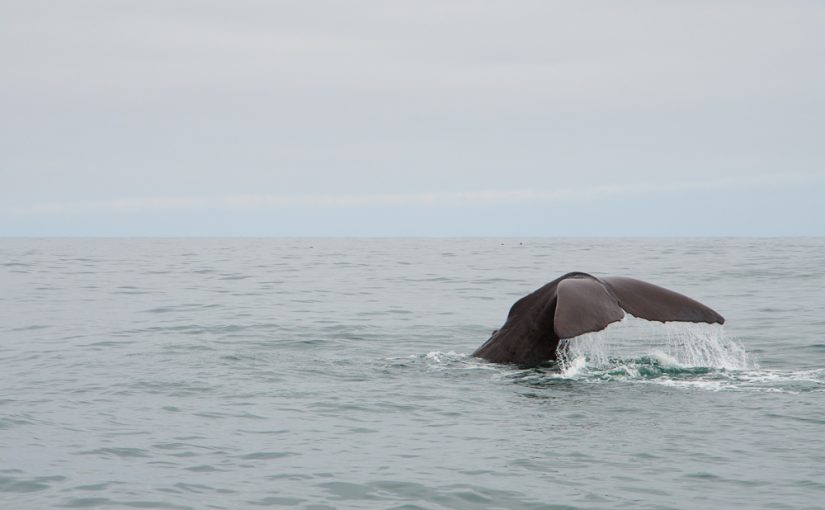 When we knew we were coming here to ski, we figured we’d need a couple of days either side to make it more a holiday and less a humiliating exercise in defeat and sore muscles. Since we’re flying in and out of Christchurch, we picked another town in the region more or less at random, which is how we ended up in Kaikoura.

The name “Kaikoura” means something like “eat crayfish” or “crayfish in the mouth”, which reads a lot like an imperative from where I’m sitting. The local fishing industry turns up not just cray, but a variety of other fish as well, including blue cod and gurnard; plus there are plenty of mountain streams nearby from which to source things like mountain salmon. On arrival, hungry and tired, we had some really excellent battered fish with chips for lunch. For dinner we took it up a notch and went to what two different sources agreed was the “nice” restaurant; it wasn’t particularly fancy, but we did enjoy some marvellous grilled fish with white wine, herbs, and butter, as well as seafood fettucine.

As well as edibles, the waters off Kaikoura are stocked with seals, dolphins, whales and albatross, and there are businesses that conduct tours to observe all of them (though not, it seems, any that conduct general tours; you have to pick one animal, and then you might get lucky and see the others on the way). Since we had an encounter with the Hector’s dolphins last year, we went with the whales, and were NOT disappointed, as evidenced above. According to our guide, off the coast is a deep underwater canyon, at the mouth of which converge a warm and a cool current, forcing fish and squid toward the coast. For that reason, male sperm whales feed there year-round. Over the course of three hours or so we saw two of them twice each, re-oxygenating on the surface before sounding in search of food. One of our new friends, we were told, is named “Tiaki”, which means “guardian”, because he has been observed fighting off killer whales that were attacking younger sperm whales.

In addition to the sperm whales, we did manage to observe some albatross, though honestly it’s pretty hard to distinguish them at a distance from the huge seagulls that inhabit these parts. We also encountered a pod of Dusky dolphins – about 300 in the group – some of them jumping around like synchronised swimmers doing backflips. It was cool, but nothing beats the Hector’s dolphins in Akaroa last year, when we could stand outside on the boat and watch them jumping around in the bow wave. This was a much larger boat with a bigger tour group to match, and while we could go outside when it was idling, they made us sit down while it was going at speed (presumably so no one could fall overboard without being noticed).

A couple of people had recommended the Kaikoura BBQ seafood hut to us, and we drove out there for a late lunch after whale watching; for around $60 we got a whole crayfish, split and cooked in herb butter, with salad and rice and garlic bread. I couldn’t even eat my whole half and Sim had to help me out with it.

We glimpsed a seal or two while out on the boat, but honestly we needn’t have worried, because while driving down along the coast we could see them on the rocks basking, and splashing around near the shore, and even one guy hanging out on the boardwalk waiting to scare walkers coming round the corner. As always, the wildlife in New Zealand is pretty much going to do what it likes, whether you like it or not.