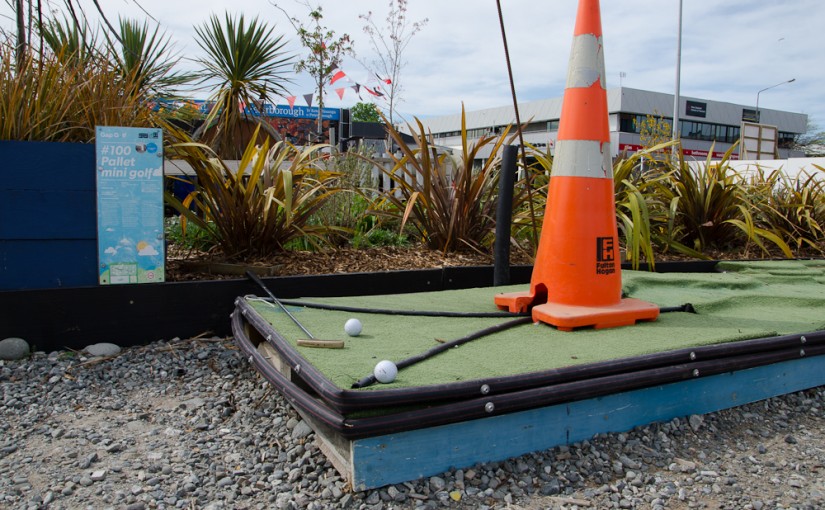 Disaster movies always have a bunch of cities being destroyed, but then once the aliens/asteroid/sharknado have been dealt with, the hero is reunited with their family and the credits roll. You never see the aftermath when the city has to be rebuilt. Well, we’re in Christchuch, and we’re seeing it now. And obviously the best way to see that is through mini-golf.

It’s nearly five years since the earthquake which destroyed so much of Christchurch. Having never been here before, it’s hard to know how much has been lost, but in the CBD there are still a lot of buildings waiting to be demolished, and even more new buildings being constructed. Roadworks are everywhere, but people aren’t – you can easily walk a few blocks and only see a handful of people on the street.

But in amongst all the de/con-struction, there are a lot of cool little things popping up. The Re:START Mall is a collection of shops in shipping containers. The new Cathedral is made from cardboard. And there’s a group called Gap Fillers who are taking vacant blocks of land and filling them with temporary installations, such as the city wide mini-golf that I spent the afternoon utilising. They’re basically like that TV show Guerrilla Gardeners that used to “revamp” empty spaces around Sydney, but with actual good ideas and follow through (everytime I drive through Ashfield I shake my head at the huge pot the guerillas installed on an empty block of land, which now just has a dead tree in it).

Currently there are five holes (with a few more on the way), so after borrowing a putter and some balls from their office and collecting my scorecard/map, I set off around the city to track them down. There was one hole near where we’re staying, which was how I first discovered this great idea. The course took me past a number of art installations, some pretty impressive graffiti and a few obviously newly built offices, surrounded by empty lots.

After traipsing around town in the blazing sun, it was a relief to return to our B&B, conveniently attached to a pub, where conveniently the owner offered to buy me a drink. I think after finishing the course three under par (including a hole in one) I’d well and truly earned that pint of cider.

One thought on “The Golfing Guide to Christchurch”