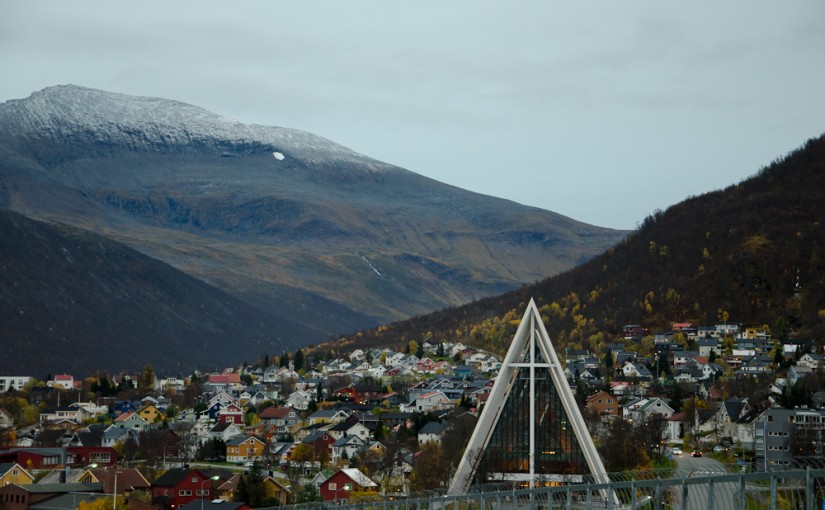 We spent three nights in Tromsø. To be honest, we didn’t see that much of it by daylight, since we were mostly out at night and had to sleep sometime. But what we did see, I thought I would attempt to describe.

First up, the climate. Being the arctic circle, I had pretty much assumed it would be at least knee-deep in snow year-round. Turns out, not so. Our aurora guide Thomas told us that because of the gulf stream, and the fact that Tromsø is on the coast, it actually has a warmer climate than some other Norwegian cities further to the south but inland. We saw this demonstrated while driving inland; the temperature dropped by about five degrees after about an hour.

Don’t get me wrong, it was still parka weather. It just wasn’t bearskin-hat-at-noon weather. Having said as much, during the short time we were there, we could see the surrounding mountains accrue more and more snow on the peaks, and evidently it was expected to start snowing in the town within a few weeks.

I get the feeling that Tromsø is a bit like your Newcastle or your Wollongong – primarily established as an industrial centre, but gradually becoming a desirable city to live in in its own right. We happened to arrive on a Saturday, so we saw first-hand that, as in other semi-industrial towns, the locals go pretty hard on the weekend. (This explained something that puzzled us at first: on Sunday, our hotel breakfast didn’t finish until 1pm.) When we got home from our first failed attempt at aurora-spotting, at about 3am, the streets were full of shivering twenty-two-year-olds in halter tops and BARE LEGS. In the ARCTIC CIRCLE. Turns out I’m now old enough to feel a barely-resistible urge to hand out blankets and cups of tea. And scoldings.

For me, the defining feature of Tromsø is probably the afternoon waffles. This appears to be a staple of most hotels from mid-range up. At afternoon tea time, someone sets out a waffle iron and a jug of batter, and you help yourself. These are eaten with strawberry jam and, for some reason, sour cream. For those of you with access to fresh salad ingredients at the supermarket, the significance of free afternoon waffles may be lost on you. However, reiterating that in Norway everything costs at least double what you would reasonably expect, in practice, free afternoon waffles means that you can bulk up on breakfast, skip lunch, and then only need a light snack before bedtime. (This can be achieved with a cup of instant noodles from the supermarket (approx. $4) and the kettle in your hotel room. Or, in my case, it can mean ice cream.)

Being so isolated, it’s not unreasonable to expect that Tromsø might be fairly insular. I did not find that to be the case. In fact, it was quite a friendly place. As elsewhere in Norway, everyone spoke English. It appears to be a domestic as well as an international tourist destination, judging by the people I observed at hotel breakfast.

One place we visited during our few waking daylight hours was the Nordnorsk Kunstmuseum (chosen primarily for its free entry). The ground floor had a temporary exhibit of photographs by two photographers; I really liked one of them, a woman named Bente Geving, whose photographs were primarily presented in a kind of diptych format. The first floor was the permanent collection with a Northern Norwegian theme, some of which was pretty melodramatic, but some of which was great (including the mandatory nod to Munch). There was also an exhibition on the top floor of art inspired by the culture and history of the Sami, the indigenous peoples of Northern Scandinavia. All up, for a free experience, the NNKM definitely earned a thumbs up.

One afternoon, we thought we’d walk across the bridge to the mainland (Tromsø city centre is located on an island) and visit the Arctic Cathedral. The walk didn’t look so long, but turned out to be mildly epic. The cathedral itself was vaguely disappointing given the ones we saw in England; it would be dwarfed by your average Anglican church in the Hills district. It was, however, undeniably beautiful, and the walk was definitely a good idea after all the free waffles.

One other random visit we paid was to a glass blowing shop called Blast, the world’s northernmost glass blowers. We didn’t know it, but evidently always two there must be, a master and an apprentice. These were standing in front of white-hot furnaces, clad in t-shirts and trousers, twirling and blowing and tapping away. Not so much gloves or long sleeves or anything. Between them and us, a rope tied to a bucket marked the line between safety and hideous death. So not somewhere to bring your family of young children and chihuahuas. Some of the glass was awesome; some of it looked like it would be at home at a cocktail party held by a teenage girl while her parents went out for the night. Although I really liked some of it, Sim convinced me that the chances of it surviving all the way to Sydney were negligible. I did pick up some earrings, though.

Sadly, all good things must come to an end, and we’ve now headed back south to Denmark. Which is a blog post for another time.

One thought on “Tromsø by day”