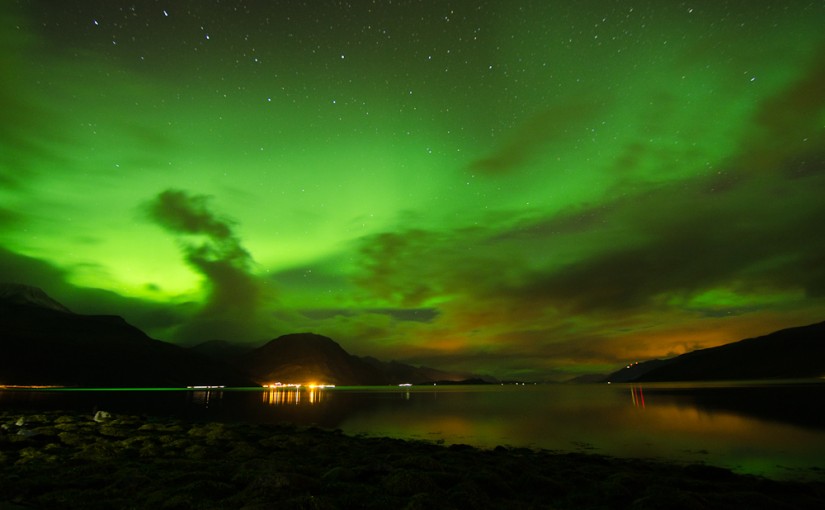 On our last night in Norway, I convinced Holly that we should have another go at seeing the Northern Lights. Given the photo above, it’s probably not too much of a spoiler to say we were more successful than last time.

Thomas, our guide from our first attempt, had two spots left in his van so we snapped them up; it turned out the other six passengers were all from Australia too – small world. We followed the same route as last time, and it started in a similar fashion, with cloudy dark skies and patches of rain not inspiring much hope. However after a few hours driving a few stars appeared in the sky, and then Thomas spotted something he thought might be Aurora and pulled over so we could take a look.

Now despite what these photos suggest, Aurora aren’t fluro green to the naked eye. Until you’re in an area with no lights and your eyes adjust, they appear more or less like clouds. However after ten minutes or so in the dark you can begin to see tints of green. It wasn’t a particularly strong night of Aurora activity the night we were out, so everything was rather faint, but I still thought it was amazing.

After watching the lights for a while, the clouds crept back in, and so we kept driving, and once again crossed the border into Finland. Near the small town of Kilpisjärvi we settled in; Thomas set up a gas cooker and reconstituted some camping meals (including a reindeer option), and the rest of us got busy taking photos (well except Holly who sensibly retreated to the relative warmth of the van with her book, and occasionally popped out to see what could be seen).

And so, here are a sample of said photos (there’s lot more that are rather similar, so if you want to see them I can show you some when we’re back). One thought on “Tromsø by night”