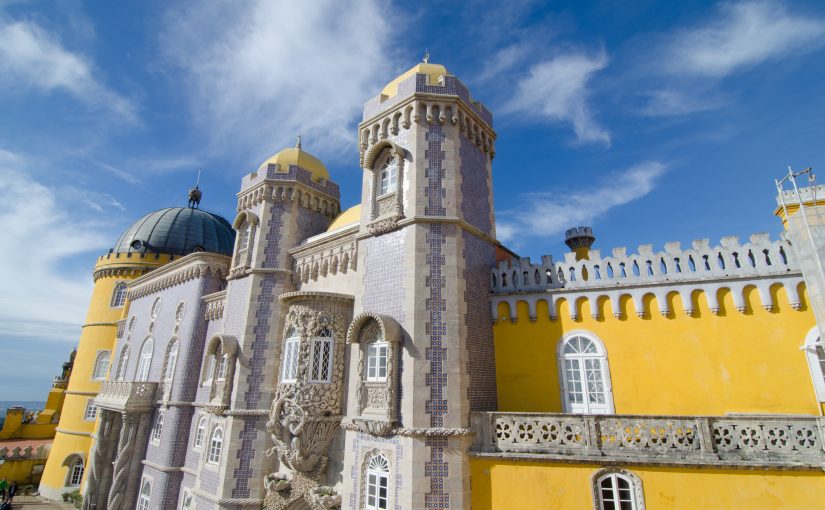 Sintra is a town a short train ride from Lisbon, built by the Portuguese in order to have somewhere to put their fancy buildings. It has a population of some 377,000, and contains five palaces, an historical convent, a hilltop castle, and several stately homes. Apart from the tourist industry, it appears to have little economic or political value, though the castle, at least, has some military advantages, being on a hill overlooking the Atlantic.

Along with most other people who arrived when we did, our first stop was the palace and grounds of Pena, which in my head I called Piña (pineapple) on account of most of it being bright yellow. (I know that’s Spanish, not Portuguese, but it’s a joke in a language that I don’t actually speak and I’m pretty happy with it.) Once upon a time it was a monastery, but in the 19th century it was bought by the Portuguese king and significantly remodelled. It’s a strange combination of European romanticism and Moorish-influenced arches, done up in bonbon colours and dropped on top of a mountain. The effect is that of a Disney castle cast by Sofia Coppola; I expected to hear popular music playing ironically in the background.

After seeing the inside (the King’s terrible art decorated some of the walls, completing the palace’s perfection) we wandered briefly into the grounds, until I put my foot down and refused to go up any more hills. It was still pretty early and we had no other set plan while in the town, so we rolled the dice and decided to go somewhere called Quinta da Regaleira, a neo-Gothic monstrosity built in the early 20th century to be the summer home of a rich family.

I could make up some jokes about this place, but honestly, I don’t think I could do any better than the leaflet that came with our tickets, which states:

The garden, as an image of the Cosmos, is revealed through a succession of magic and mysterious places. The quest for paradise is found in coexistence with a mundus inferus – such as Dante’s Inferno – through which the candidate for initiation is led by an Ariadne’s thread. Various scenes from the initiate’s journey appear along the way of the vera peregrinatio mundi through a symbolic garden where we can feel the Harmony of the Spheres and examine the perspective of an ascetic conscience, by analogy to the metaphysical quest for the Being that is found in the great Epics. In these realms abound references to the worlds of mythology, to Olympus, Virgil, Dante, Milton and Camões, and to the mission of the Templars as continued by the Order of Christ, to great mystics and miraculous magicians, and to the enigmas of the alchemical Ars Magna.

So yeah, it’s less a garden and more a pastiche of every Significant Idea that the architects could come up with in order to satisfy what must have been a very fussy but confused client. Imagine the conversations before each client meeting. “So are we good?” “Needs more Templars.” Also, there is actually a false well meant to symbolise the journey from Earth to Heaven or something, and called the “Initiatic Well”, which I found deeply concerning, because INITIATION INTO WHAT. Other features of the garden included “Grotto of the East” and my personal favourite, “Portal of the Guardians”.

It should be no surprise that we had loads of fun here. A number of the garden structures were linked by underground tunnels lit by fairy lights, and there were little decorative castle towers dotted around that Sim climbed up (I was done with hills, and that included stairs). As we approached the main house, there was a dreadful musician mutilating an already-terrible electric piano; he was subsequently joined by an actual interpretive dancer, because apparently the scene COULD be more appropriate.