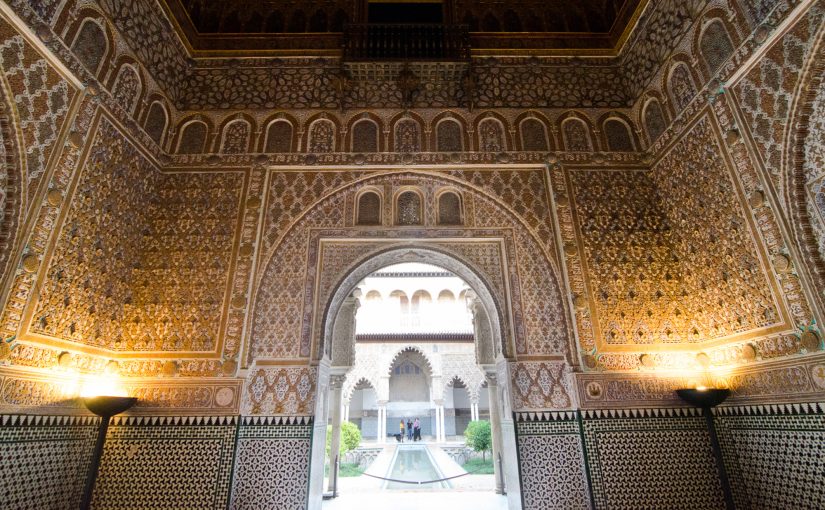 It’s the thing I was most excited about in Seville! The Real Alcázar. A network of palaces originally built by the Moors, it was then added to over the centuries by the Castilians, and even today includes the official residence of the King and Queen when in Seville. (Side note: did you know there was still a monarchy in Spain? I did not. This is something I possibly should have googled before I came here; the Catalan situation seemed more of an immediate issue at the time but in the end our entire interaction with it was seeing flags hanging from windows.)

There was quite a queue waiting for the Alcázar to open – buy tickets in advance! It really does work! – but when we were given our maps we spotted what looked like a hedge maze in the grounds and charged off to find it, leaving the tour groups still gazing around the entrance courtyard. This turned out to be an excellent move on our part, though not for the reasons we expected: the route we chose to get to the garden took us through the main palace, which at that point contained only a couple of other people. It was STUNNING, with ornate ceilings, carved stone and wood decorations, and tile mosaics that literally caused me to say, out loud, “eat it, Gaudí.” The wonder and splendour were noticeably diminished by the time the first tour group caught up with us and messed things up with their inane chatter in place of the previous awestruck silence.

After all that, the hedge maze when we found it was a disappointment, straggly and shoulder-high and not really designed for getting lost in, though it did contain some secluded areas that I suspect were used for palace seductions. The grounds were beautiful enough, but they paled in comparison to the interiors. We happily spent a whole morning there, marvelling at the medieval drainage systems (truly this has been the Holiday of Drains, and we haven’t even seen the Paris sewers yet) and laughing at a tile we saw repeated in a number of buildings that just said “Plus Ultra”. I don’t know what it was for and I don’t care to know. It perfectly represented the Alcázar experience, which was both Plus and Ultra.

Other Seville stuff! In the afternoon we went to see a Baroque era church called the Church of the Divine Saviour, a true monstrosity that confirmed in me the extreme Protestant aesthetic of my soul. Sim also took a walking tour of the old Jewish quarter where we were staying, something I’m pretty sure I would have loved, but I was feeling unwell after all the charging around and took to my bed.

Before leaving, we paid a final, slightly rushed visit to the Cathedral of Seville. You’d think we’d be sick of Gothic cathedrals by this point but I GUESS NOT, which is probably lucky since, again, Paris is yet to come. Yet again, buying a ticket in advance avoided the enormous queues. I had mixed feelings about this particular church. It was pretty interesting to learn that it didn’t conform to the usual cross shape by reason of having been, originally, a mosque. I don’t know how much of the mosque actually forms part of the cathedral, but I guess the foundation of it played a part at the very least. The tomb of Christopher Columbus is a feature, which is something to evoke a range of strong feelings, and the sacristies and treasury contain enough gold and jewels to feed all of the hungry in Christendom, something that also ought to evoke some strong feelings in visitors but likely does not. We had a flight to catch, so probably missed some things, but I’m sure we would have missed something no matter how much time we devote to it: it was huge, after all, the third largest cathedral in Europe.