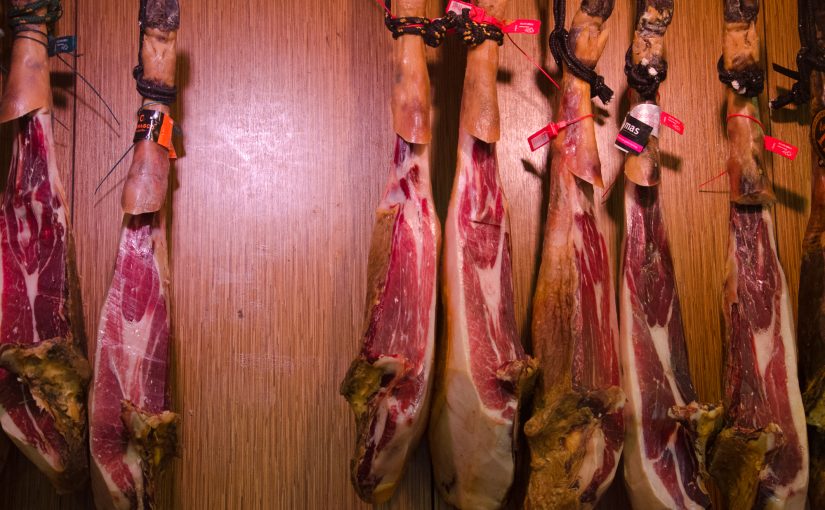 After a pair of very annoying flights occupied by people put on this earth to increase my blood pressure*, we have touched down in peaceful, politically stable Barcelona. Everyone seems very chill for being dangerous revolutionaries, though Catalan flags are hanging from many, many buildings. Also signs that say “Hola Democràcia”, which seems like the most benign political slogan ever but I’m sure is actually very incendiary. Possibly the general air of goodwill owes something to the fact that a glass of decent wine in a restaurant here will cost you less than a bottle of water in a restaurant in Sydney.

The main news from Spain, which falls primarily on the plain, is that we’re going to come home several kilos heavier. Food is GOOD and it is CHEAP. We haven’t even eaten in any overtly cheap establishments yet – in fact our meal tonight was kind of fancy – but we’re flying in under budget. We definitely have not yet got the hang of eating as late as the locals, but we’re working up to it. We thought we were doing well today by waiting till after 8, but when we walked into a nearly-empty restaurant we had to be squeezed in, as it was actually almost booked out. (Proof of this arrived over the course of the next hour – it was almost up to pumping by the time we finished dessert.)

Our scheduled activity for today, our first full day, was a cooking class. My confession is that the part I was looking forward to the most was the pre-class market tour, during which we bought the seafood for our paella. Back in 2011 when we went to Vietnam, the tour of Ben Thanh market we took was the moment when I began to feel I understood the culture we were surrounded by, and I did get a similar vibe this morning, though the Mercat de San Josep de la Boqueria is significantly less confronting in terms of animal parts. They even turn the monkfish upside-down so their terrifying faces aren’t showing. (And as our chef Carlos said, you have to respect an animal that’s like 80% mouth but still maintains a slim lower body.)

The class itself was fun, and I got to knead some dough, which satisfied a pastry-based need I didn’t realise was starting to wear on me after only about 48 hours away from my kitchen. We were stuffed by the end, and I barely touched my paella – disappointing given the freshness of the seafood we had bought that morning. Guys, I DIDN’T even FINISH my DESSERT. It was too much food.

So far we’ve done a lot of walking around. I’m fascinated by the drain covers, some of which are made of stone and appear several hundred years old. (The water engineers in my life would enjoy this city, I suspect. We also saw a section of Roman aqueduct just hanging around on some street somewhere.) The pedestrian streets in the Barrio Gòtico, where we’re staying, are so narrow in parts that it’s permanently dark at ground level. It’s not until you get to the more open plazas that you have any sense of what the day is like. Importantly, I have also made several new dog friends. This appears to be a city of really superlative bulldogs.

*I actually had my blood pressure taken on Wednesday, 114/70. Eat it, cholesterol!